A bit of rain can’t deter volunteers from blackthorn thinning

Despite heavy rain overnight, and forecasts of more for the rest of the day, on Saturday the 12th of October a group of 12 brilliant volunteers turn up decked out in wet weather gear to continue working to improve Berrylands Nature Reserve.

Earlier in the week the special nature reserve sign, handmade by one of our volunteers last year, had been discovered in nearby bushes rather than in pride of place in it’s usual position just over the wooden bridge.
Given the weight of the thing I have no idea how someone managed to wrestle it out, but our first task for the day was to try and ensure it couldn’t happen again. Thanks to local conservationist Elliot, who had discovered the sign while helping with one of the forest school sessions in the reserve, and kindly donated some spare postcrete to help us restore it.

No damage seemed to have been done to the sign, so after making the existing post-hole a little bigger to accommodate the concrete, the sign was lovingly re-installed, and will hopefully remain in situ for many years to come. 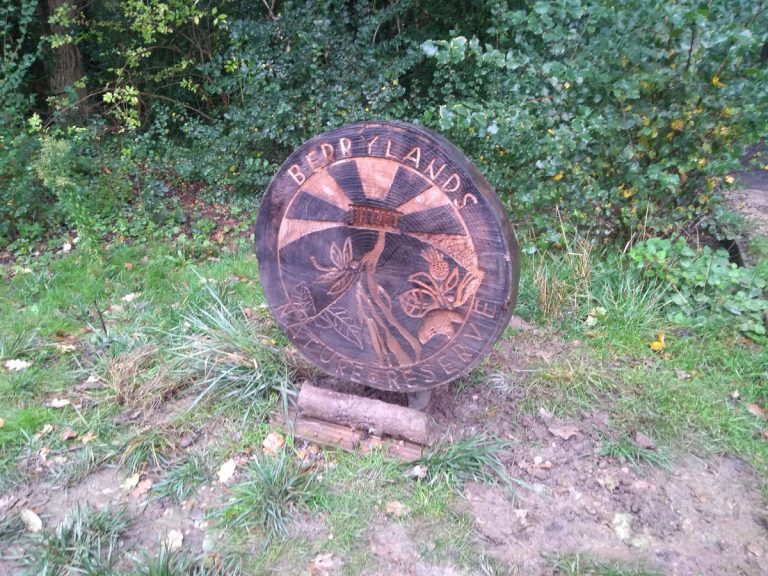 Back where it should be! 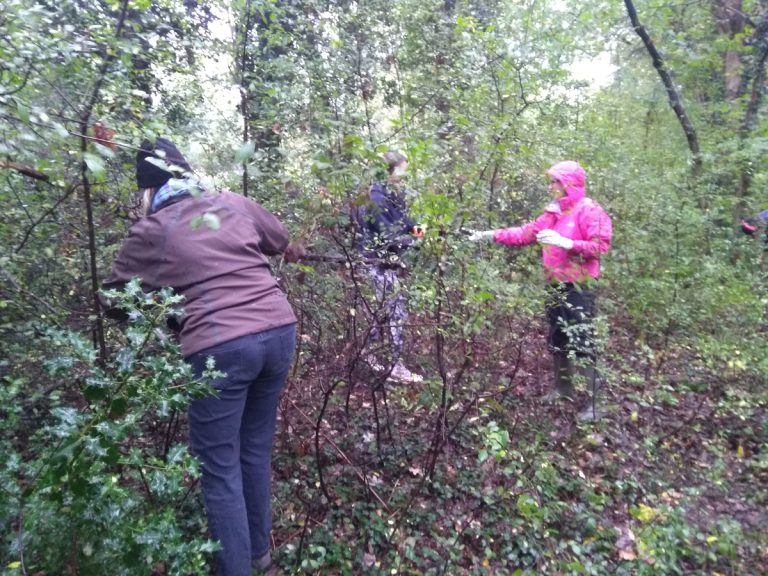 Spirtis high in spite of weather 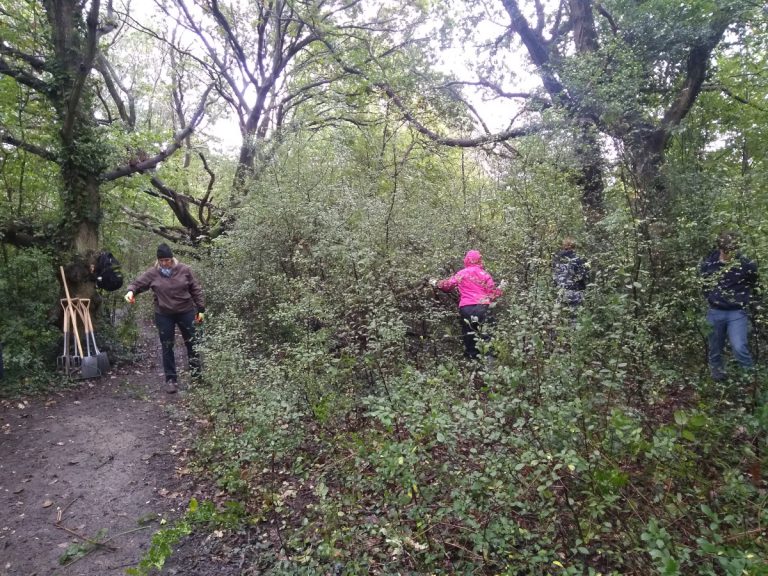 Before the repair of the sign took precedence, the main task for the day was planned to be thinning out some of the blackthorn around the site, which thanks to it’s prolific production of new suckers, and the lack of grazing animals on site that in a fully natural environment would help to control it, has formed a few overly dense clusters around the nature reserve.

Sheltered under the canopy of some of our large oak trees, volunteers started with a blackthorn patch near where the sign installation was simultaneously taking place, being careful of the abundant spines which give it’s name.

At the same time a second small group did a little bit more work on the “haloing” around one of our oak trees started at a previous session. Ensuring the tree would continue to get enough light, and stop it from becoming overcrowded.

Calls for cups of tea started a little earlier than usual, but in spite of the near constant drizzle volunteers spirit’s remained high, as friendly conversation flitted between a mutual appreciation and ineptitude of TV quiz University Challenge and the prospect of Halloween in the nature reserve (I’m not sure the idea of chasing people in the dark wearing a plague doctor’s mask would entirely satisfy our health and safety, or safeguarding requirements!).
Once satisfied that the area was looking much improved, with space created to allow diversity in the structure and age of the blackthorn, the group then decided to move over to our next patch before downing tools for a well earned tea & biscuit break. 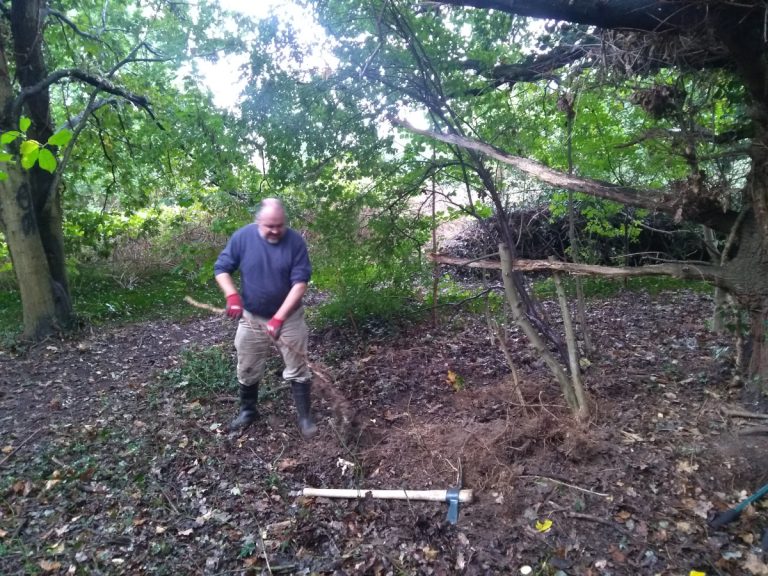 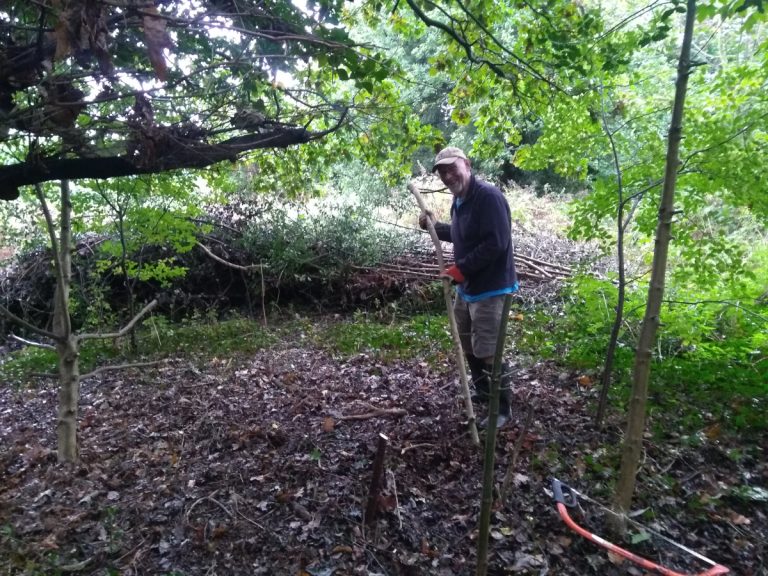 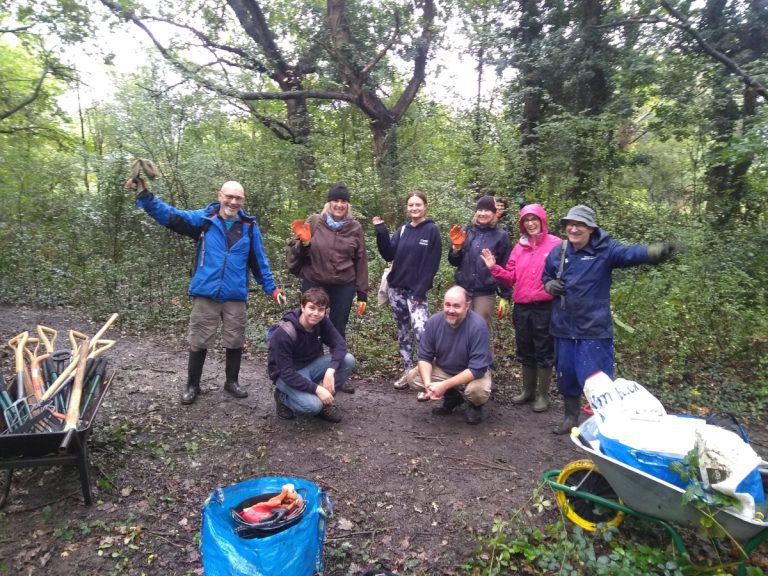 Ready for a tea break!

Following some good humoured jesting about the supply of supermarket own brand biscuits on offer (there were no complaints after the packers were open!), and with everyone revitalised, our next task was the iconic “Blacktorn Tunnel”.
This is the area of the site where blackthorn is most prevalent, and has formed into a magnificent arch over the path through the area.
Having had no serious management for many years (if ever), a lot of work was needed to get this area under control and ensure it can thrive, providing important habitat for priority wildlife species such as the Brown and Black Hairstreak butterflies, both of which lay their eggs exclusively on young blackthorn saplings, and on which their larvae feed.

Given how closely packed, and prickly the trees were, thinning the area it was hard going, but with persistence the volunteers made great progress. 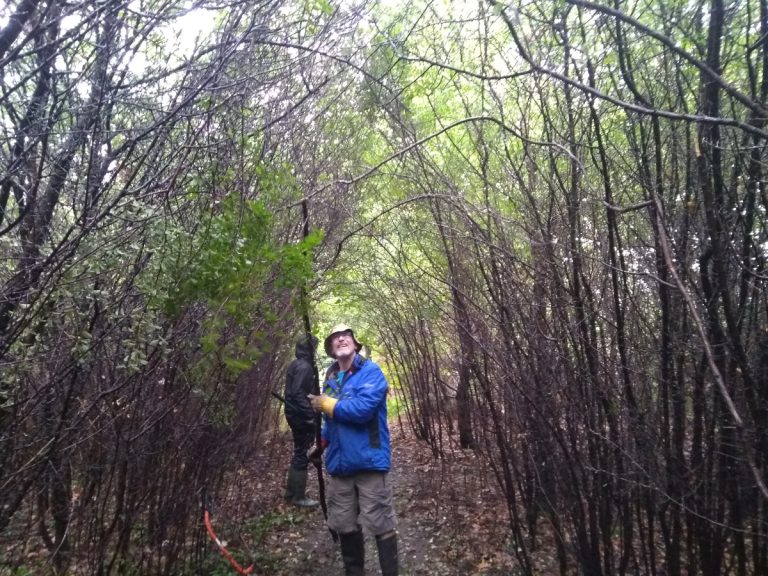 Trying to keep the shape while thinning 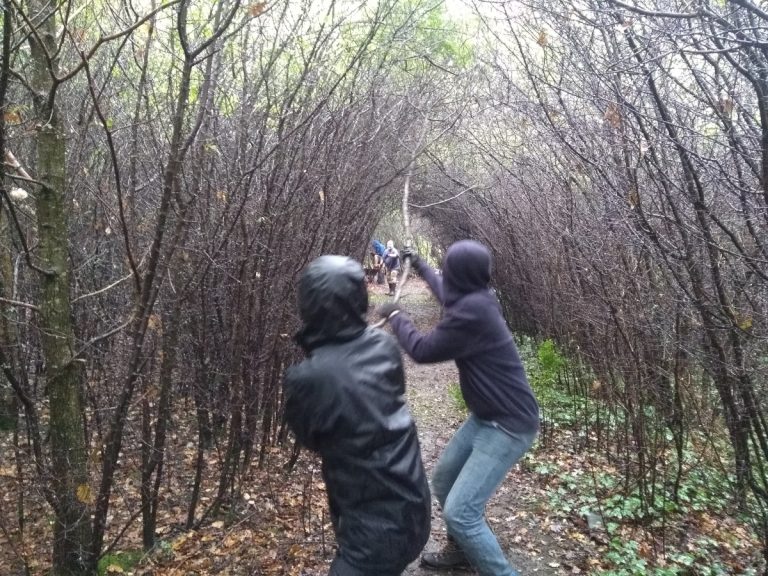 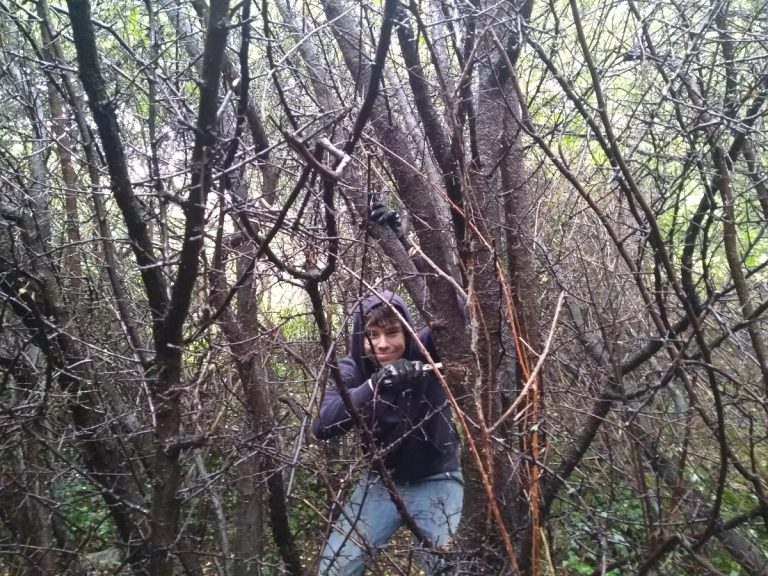 Still chipper after a soggy day 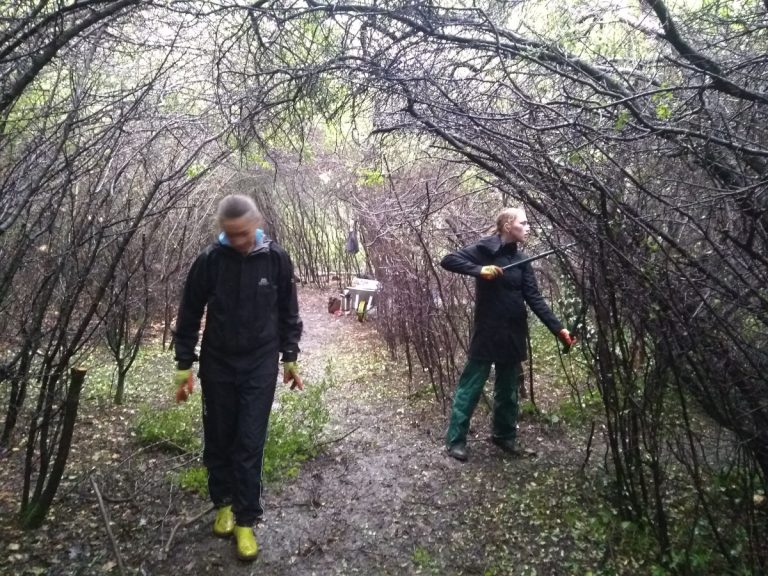 Nearly home time to get dry 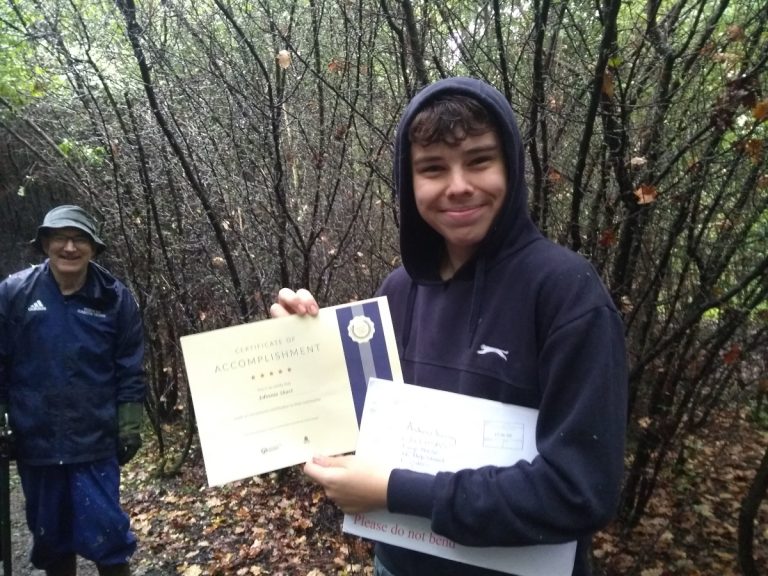 With a few volunteers needing to leave a little early, we all reconvened briefly to present on of our fantastic young volunteers, Johnnie, with a volunteer award, courtesy of Volunteering Kingston, to say thank you for all the work he does helping to support the group both at our conservation events in the nature reserve, and also with promoting the group and the site at fêtes, fairs, festivals and other events throughout the year.
His enthusiasm and encyclopaedic wildlife knowledge, have been invaluable to the group, and he is just a thoroughly nice chap to have around.

While we were working one of the volunteers also discovered traces of a path clearly visible in old aerial photographs of the nature reserve, but long lost to overgrowing foliage.
We will be back to continue thinning blackthorn in a future session, and are hoping to restore this path to a usable state at the same time.