Rejuvinating hazel, and clearing deadwood from the stream

Early spring is the perfect time of year to start looking after the abundance of hazel trees throughout Berrylands Nature Reserve. Most of these trees have clearly been copiced at some point in the past, as demonstrated by the multitude of stems originating at ground level from each stool, as opposed to having a single trunk.

Coppicing can be a great way of increasing the amount of light reaching the woodland floor, as well as enabling the harvesting of a regular supply of lots long straight stems suitable for a wide variety of practical applications including fencing and for the production of tools.
Coppicing hazel also substantially increases the life span of the trees from approximately 80 years up to several hundred!

Unfortunately this copicing appears to have ceased many years ago, and rather than exhibiting the usual open habit so characteristic of regularly copiced hazel, these trees are now increasingly dense, shading the woodland floor, reducing the biodiversity of the site, and potentially making them susceptible to disease where the many large stems abrade each other.

Traditionally when managing copiced hazel you would remove all stems back to the stool, on a rotational basis, but we felt that after years of being uncared-for this was likely to give the trees too much of a shock.
We therefore decided that in order to first get the trees under control, at this stage we would only remove the largest stems from each tree.

After going over the process of how to identify the trees, the reasoning behing our chosen approach to managing them, and considerations to take into account whem trimming them. the volunteers all split up into small teams of 3 or 4.
Each team identified a tree in need of work, and between them discussed how best to approach their particular tree. These teams then worked together armed with pruning saws, bow saws and loppers to remove the identified stems, and process them for use around the reserve in the future. 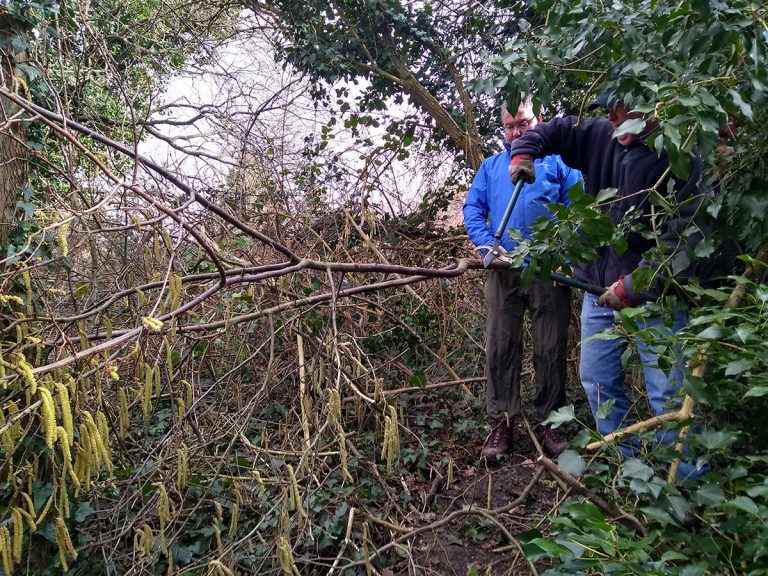 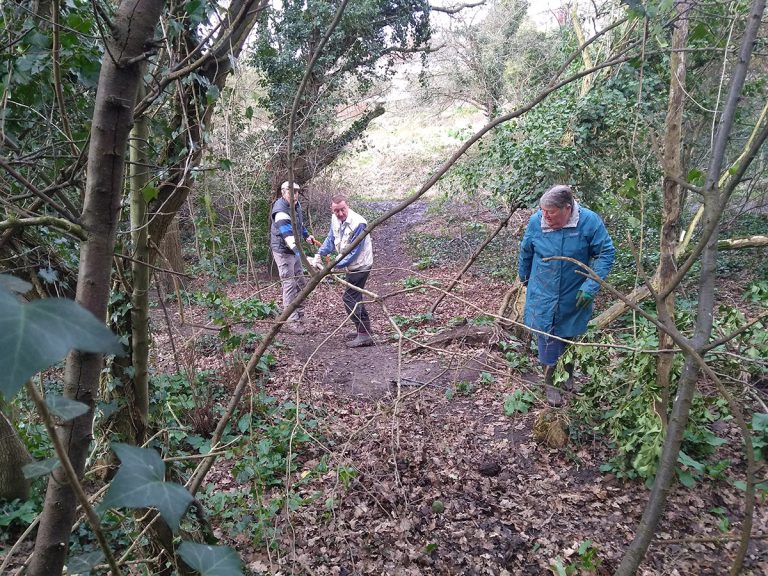 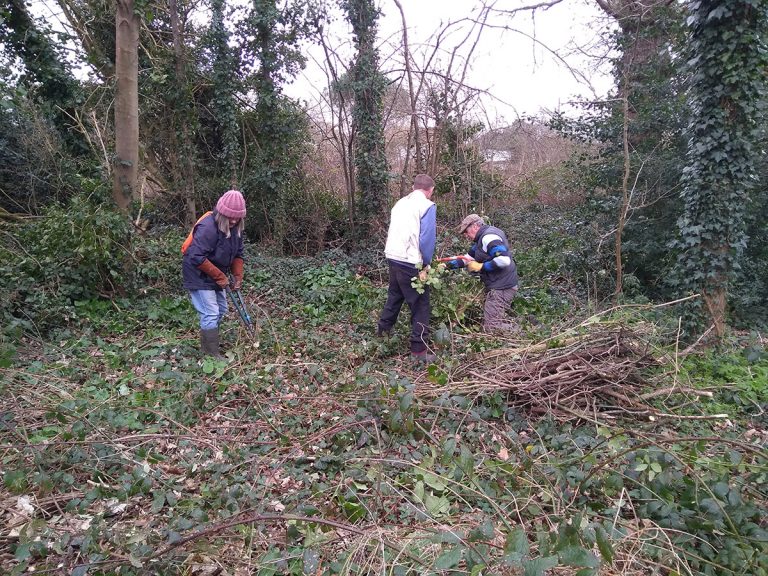 It might take a few years to get the hazel back into shape, but once we do it will be exciting to see what new plants pop-up underneath the trees on the woodland floor.

After the team had finished with the hazel in the middle of the Nature Reserve we stopped for a well earned tea break by the Wildlife Pond, before embarking refreshed for our second set of tasks for the day.

Since the enhancement of the site in 2018 we’ve been very fortunate to have a couple of groups running regular forest school sessions in the woodland, helping connect local kids with the natural environment.
The main area used for running these events has become a bit overgrown in recent months, making it more difficult for the groups running their sessions. Half of the volunteers set out to clear up this space removing self seeded saplings and trimming back some of the excess growth encroaching.

The rest of the volunteers started by finishing moving the trimmed hazel, before setting off to remove a tree which had fallen into the stream since our previous volunteer session.
This tree had been dead for some time, held up largely by the thick ivy growing around it. Deadwood in the canopy provides great habitat for a variety of invertebrates, but unfortunately the recent high winds had brought it down, and although the tree wasn’t entirely blocking the flow, given how shallow that part of the stream becomes over the spring and particularly the summer, the group decided it was best to remove it. 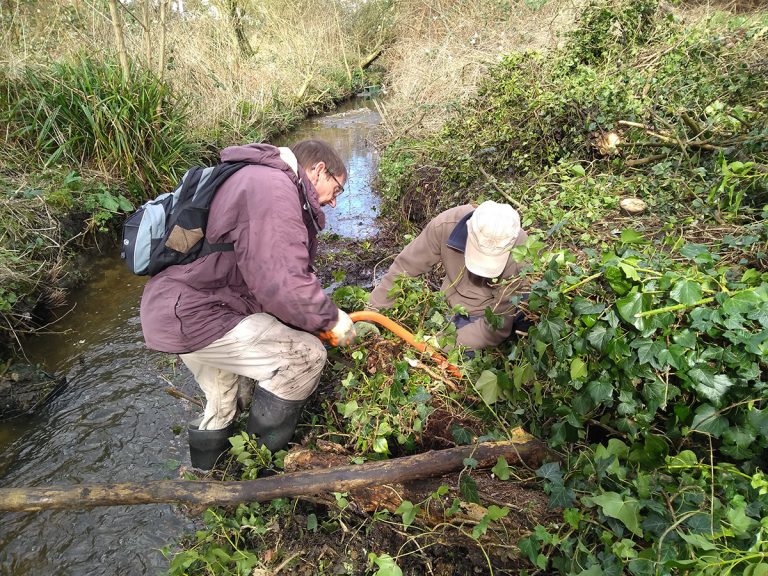 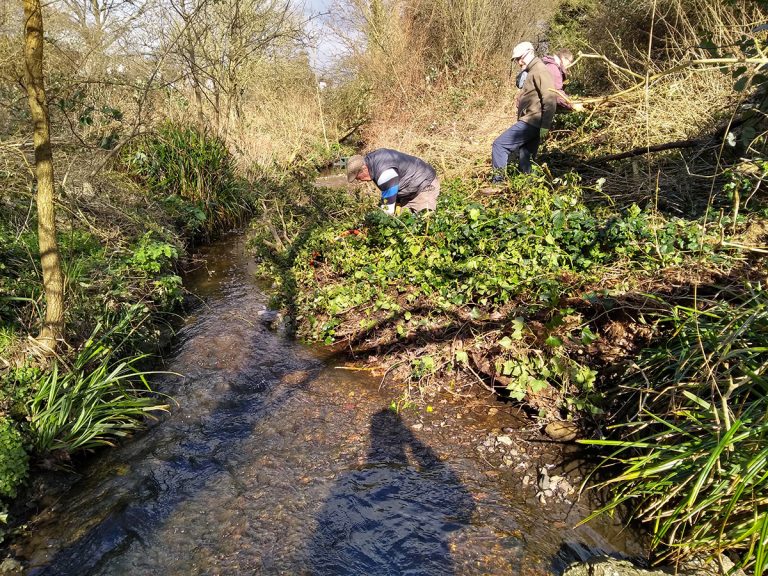 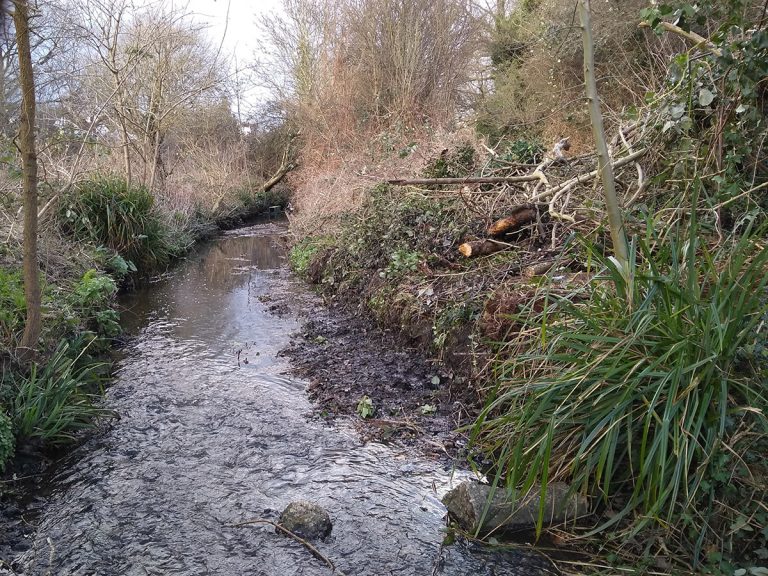 Heavy rain in the preceding days had caused the water flow around the tree to scoured some great natural undulation in the opposite bank, which helps create some fantastic diversity of flow in the stream.

With a mix of volunteers working in the stream and those working on the bank we were able to trim the tree down into manageable sized chunks, and heave it out to create a habitat pile nearby, where the dead wood can continue to provide great habitat.

With just twenty minutes left in the session the two parts of the group came back together, and after some encouragement not to have an early finish, started a little more hazel management behind the wildlife pond, which we will continue at a future session. This material will be used for the construction of a new section of dead hedge, which is a great way to use up various cut branches and foliage and produce great habitat for invertebrates, as well as cover for some birds and small mammals. 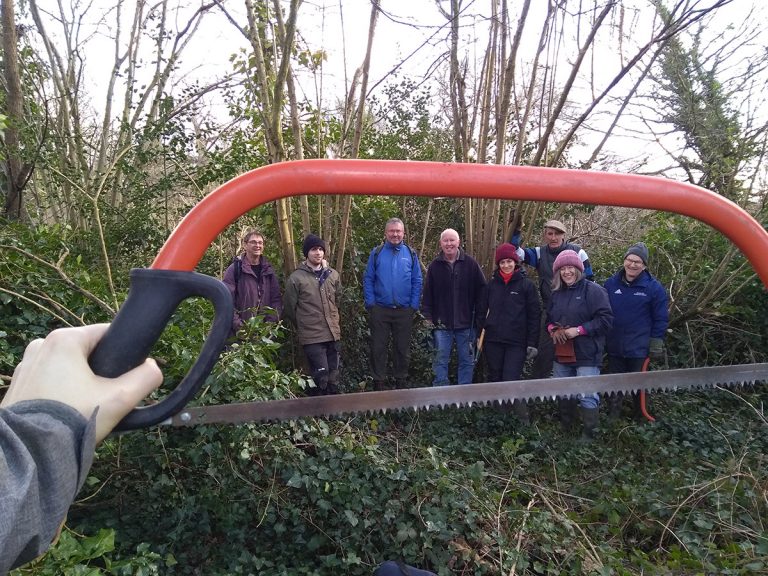 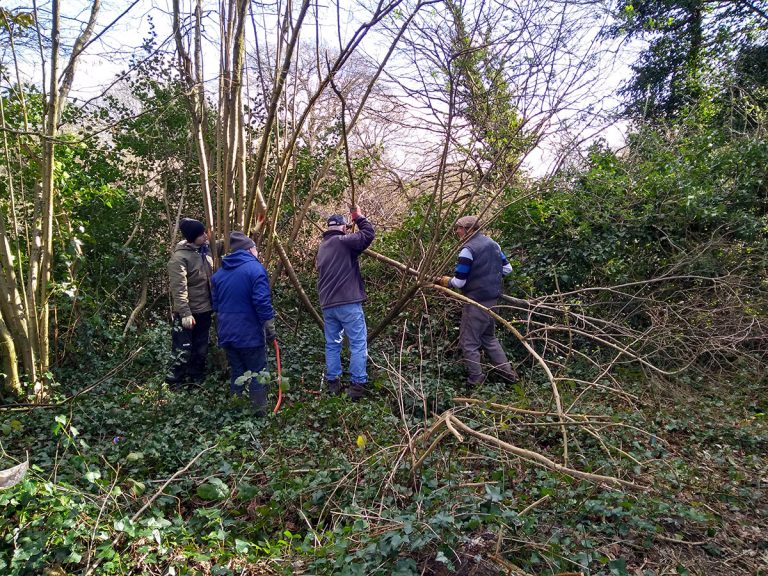 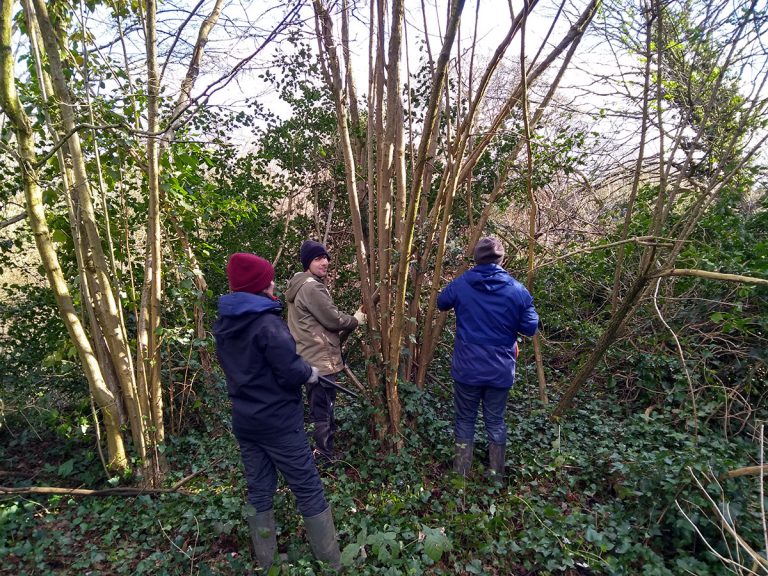 Thanks so much to all the volunteers who came along and lent a hand as we continue to work together as a community to rejuvenate the space.